Skip to content
OPTIMIZE YOUR SLEEP + recoveryTHE ALL NEW AMINOZzz
Free shippingOn all orders over $100
500+ beyond reviewsSee what people are saying.

But improving sleep isn't just about getting more hours. It's about getting into the high-quality deep delta-wave sleep that allows your body to super charge.
AminoZzz is the first all-in-one EAA + sleep recovery formula designed to allow your mind to wind down before bed, your nervous system to tap into deeper rest, and your body to maximize repair and recovery.

Loaded with 5g of vegan sourced EAAs to promote recovery, preserve lean muscle tissue and stimulate muscle growth, combined with stress-reducing and sleep-inducing ingredients such as GABA, ZMA, L-Theanine and Melatonin – AminoZzz is truly the ultimate nightcap for those who demand more from themselves.

Vegan-Sourced EAA Blend - Essential Amino Acids - Amino acids are the building blocks of protein. An essential amino acid (EAA) is an amino acid that your body cannot synthesize on its own. The nine you need but cannot synthesize are called EAAs. Among those, branched-chain amino acids (BCAAs) are crucial to your muscles, with leucine being especially important because of its ability to induce muscle protein synthesis, muscle growth, and promote recovery.

GABA - Gamma Aminobutyric Acid, also known as GABA, is a non-essential amino acid that acts as a chemical messenger in the human brain. It regulates brain and nerve cell activity by inhibiting the number of neurons firing in the brain, thus acting as the brain's natural calming agent. GABA helps promote relaxation and ease nervous tension by inhibiting over-stimulation of the brain.

L-Theanine – A naturally occurring, non-protein amino acid that is primarily found in green tea. Theanine acts as a glutamic acid analog that promotes relaxation by reducing stress and anxiety levels. It is able to cross the blood-brain barrier and increases alpha waves, which are associated with a more relaxed mental state.

Magnesium - Magnesium is involved in numerous processes that affect muscle function, including oxygen uptake, energy production and electrolyte balance. Mineral deficiencies are prevalent among the general population today but especially in people who exercise often. Magnesium is one of the most essential minerals to supplement if you exercise regularly because sweating and physical stress deplete our mineral stores. Supplementation of Magnesium also improves sleep and promotes both physical and mental relaxation.

Vitamin B6 - Also known as pyridoxine, is one of eight B vitamins that your body needs to stay healthy. Vitamin B6 is an essential part of nearly 200 chemical reactions in the human body, and it's necessary for processes like neurotransmitter production, immune function and blood circulation.

Zinc - Zinc is an essential mineral with anti-inflammatory and antioxidant properties involved in hundreds of functions. It plays many roles in antioxidant enzymes, brain function, and the immune system. Zinc is most commonly taken to reduce the duration of the common cold but consumption of Zinc is also an excellent sleep aid because it helps promote uninterrupted sleep and has a calming & antidepressant effect. Along with helping to regulate sleep, Zinc has also been shown to improve the vividness of dreams.

Melatonin - Melatonin is a neurohormone secreted by the pineal gland in the brain, and it is well known for causing and regulating sleep. Light suppresses melatonin synthesis, so you should always sleep in complete darkness. Melatonin is used as a supplement to normalise abnormal sleep patterns and it works by decreasing the time it takes to fall asleep, improving sleep quality, and increasing sleep duration. Short-term use of Melatonin has not been shown to negatively affect the natural production of Melatonin after discontinuation of use. The Perfect Nightcap – For many people it can be hard to calm the mind when it's time for sleep and that is precisely why they love AminoZzz. The synergy of the relaxation ingredients combined with the EAA's gently calm the mind and prepare the body for deep sleep while providing the peace of mind that you are supplying all the essential nutrients required for recovery.

Wake Up Rested & Recovered – There is no feeling quite like waking up feeling well-rested and ready to seize the day. Wake up feeling mentally sharp and fully recovered without the dreaded groggy feeling associated with some sleep aids.

Deep & Uninterrupted Sleep – AminoZzz provides a deep & uninterrupted sleep. Gone are those late nights of tossing and turning accompanied by hours of scrolling through your phone; AminoZzz was formulated to help you fall asleep faster and induce a tranquil, uninterrupted and deep sleep until that lovely alarm clock fires up in the morning.

The Details That Matter.

950mg of Relaxation Ingredients - The ultimate blend of stress-reducing and sleep-inducing ingredients that work synergistically to prepare the mind and body for optimal sleep. Including: 750mg GABA, 200mg Theanine, 150mg Magnesium, 10mg Zinc, and 5mg Melatonin.

5mg of Melatonin - Often called the "sleep hormone," melatonin helps normalise sleep patterns, and works by decreasing the time it takes to fall asleep, improving sleep quality, and increasing sleep duration. Supplementing with Melatonin has been shown to improve these attributes without negatively effecting your natural production.

750mg GABBA -  Supplementation with GABA, a naturally occurring amino acid, has been shown to increase the deep relaxation alpha brain waves while decreasing the more active beta brain waves – slowing you down before bed. GABA also supports the production of key hormones that control muscle growth including human growth hormone.

ZMA - ZMA is a natural mineral supplement made of Zinc, Magnesium, and Vitamin B6 that improves sleep quality and the vividness of dreams. Zinc supports your immune system and muscles. Magnesium plays a role in metabolism, muscle function and helps manage sleep. B6 plays a vital role in mood regulation as it is used in the production of neurotransmitters.

Was looking for something to help me feel more energetic when I wake up & this definitely does just that!

As a light sleeper, I had a lot of expectations when I first bought this product. It does not disapoint! I feel sleepy about 15-20 minutes after taking it. And it taste like heaven! I’m excited for bed time now 😀 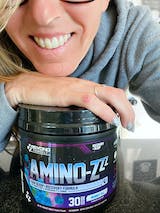 As a Wellness Coach the single most important thing I stress to my clients is the power of QUALITY sleep.

Whether it’s improving your immunity, developing muscle or enhancing your performance, sleep is EVERYTHING.

So you can imagine my excitement when Amino Zzz’s launched!!

In the O’Brien Fitness community, Amino Zzz’s is become one of our go-to supplements. Improving the quality of our sleep one delicious scoop at a time!

Thank you Beyond Yourself! 🧡 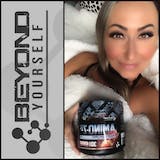 AminoZzz is a great product. I have used it for just over a week now and I have had noticeable improvement in my sleep and relaxation at night. If you struggle at all with sleep, get this product while it's hott!